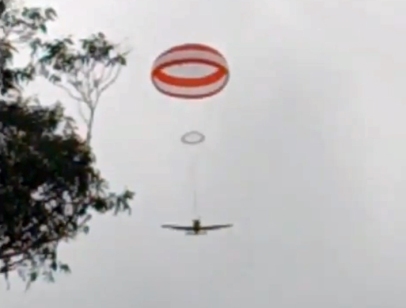 A ballistic rescue system (BRS) is an option available on Foxbat aircraft – about 15 of the Australian fleet of 125 are fitted with them. Thankfully, no-one has needed to deploy a BRS on an Australia Foxbat.

However, the pilot of this Cirrus was not so lucky, although due to the BRS, he and his passengers all walked away from what otherwise might have been a nasty incident.

It was around 2pm on Saturday afternoon, 10 December 2014 at Lawson, west of Sydney in New South Wales when some sort of problem occurred with the aircraft and the BRS was deployed – an excellent example of how modern technology can dramatically improve the safety of light aircraft.

Here’s a link for more information, including a short piece of video: Sydney Morning Herald