I did not know Darrell but Foxbat owner Andrew Wood has contributed the following story, which I think is a wonderful example of a tribute from pilots to a fellow flyer and his family.

Darrell’s history is quite unique. His career was as a police officer but his passion was flying. Darrell originally flew gliders before his interests moved towards Light Sport Aircraft some years later. Darrell was an instructor at Adelaide Soaring Club (ASC) and was heavily involved in introducing new students to the wonders of aviation. Darrell was a passionate man when it came to aviation and instruction. This passion was supported by his wife Sue, who is a Senior Instructor at ASC. 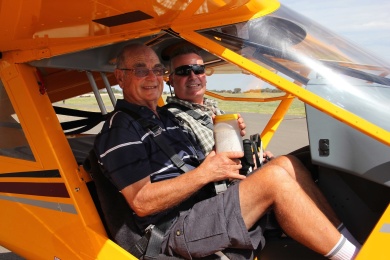 Darrell passed away on 10 March 2013 following a prolonged battle with cancer and had asked that his ashes be released over the flying field he considered a part of his life for many years. One year to the day, his wife Sue organised for Club members, family and friends to celebrate Darrell’s wishes with the releasing of his ashes with a low, slow, fly over of the field. My offer to fly my Foxbat alongside another aircraft was accepted.

Needless to say I was somewhat nervous about taking the door off the Foxbat as I was unsure just how it would behave and how the aircraft would react to flying very low and very slow to allow sufficient time for release of the ashes. We first carried out a test run and I must admit, the aircraft handled superbly – but it was loud and windy in the cabin with the passenger door off!

After a successful test run it was time for the real event. Bob Page took Sue up in his Savannah aircraft whilst I took ASC CFI, Karl Faeth in my Foxbat. My role was simply to fly a suitable circuit and descend low and slow, slightly offset to the left of runway centreline. Bob’s role – being the far more experienced pilot – was to join abreast of me to the right, no closer than 100′. Our passengers – Karl and Sue – would release the ashes simultaneously as we approached the cross runway.

Everything went without a hitch and we returned to the awaiting crowd for commemorative photos. To be honest, it was an easy event to volunteer for as the Ingham family are wonderful people, extremely supportive of the soaring club and those who wish to experience the thrills of aviation, on many occasions for the first time. Following the service it was whispered by many: “that’s how I would like to go, my ashes laid over the field”.

Sue had a small plaque placed over a memorial at Darrell’s family home which reads: “Darrell, still flying!” My thoughts go out to Sue and her family and I am extremely honoured to have been a part of the celebration of Darrell’s life and this very special event.