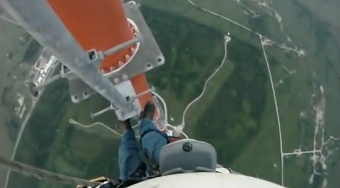 It may not be very well-known, but many pilots – in fact a higher percentage than the non-pilot population – suffer from acrophobia, a fear of heights or high places. Sometimes this is (wrongly) called vertigo, which more correctly applies to symptoms of spinning and dizziness.

Acrophobia has a range of its own symptoms from relatively mild discomfort through to profuse sweating, nausea, trembling, hallucinations, visual disturbance, panic attack, palpitations or racing of heartbeat, shaky legs, pale colour and fear of impending doom or death.

For some reason, this does not affect pilots when flying their aircraft but can have strong effects when they are in a tall building, or visiting tall monuments and structures. I am told that the Eiffel Tower and Washington Monument are particularly disliked and make people feel the building is toppling over as they peer out and down.

Various studies have been carried out on the subject. Some findings suggest that the phobia pilots experience is not of height itself but rather a lack-of-control. That lack-of-control manifests itself most often when standing near the edge of a tall structure when a fall could result – hence the common perception that this is a fear of heights. If you fall, you will have total lack-of-control and you know it. A pilot in an aeroplane will be using all of their training, knowledge & experience to maintain control.

Personally, I’m not so sure this is the answer. How do you account for people who experience acrophobia even when they are inside an enclosed space with glass windows and no possibility at all of falling out?

Here are some facts & figures on acrophobia:

To round it all off, here are a couple of nice little videos about climbing high towers. Be warned! They are not recommended for acrophobics!

1 thought on “Acrophobia – do you suffer?”