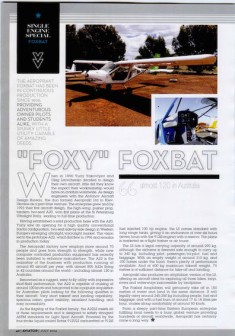 Many thanks to the Australian Aviator magazine – published from its base in Perth, Western Australia – for a short 1-page article on the Foxbat, as part of its July 2014 issue feature: ‘Single Engine Stunners’.

It seems hardly any time at all since ‘Aviator’ morphed from its ‘Tarmac’ magazine origins and blossomed into the high quality publication it now is. ‘Tarmac’, if I recall correctly, was primarily a local WA magazine (maybe even just Jandakot Airport) focused strongly on helicopters. While some issues of Aviator seem to hark back to its helicopter days, it has widened its scope considerably. In particular, unlike some other glossy aviation magazines, it has welcomed the smaller end of the market and has included many articles about ultralights and Light Sport Aircraft.

As mentioned above, the current (July 2014) issue features single engine aircraft from the (relatively) heavy metal Cessna Caravan and TBM900 right down to the ubiquitous Foxbat. And quite a few points in between. There’s a flight test of a classic Cessna 170. There’s a long article about the Tiger Moth and last, but not least, a ride in a Stampe – a biplane often mistaken for a Tiger Moth but in fact of Belgian origins.

If their advertising rates weren’t so high, I might be in there more often!