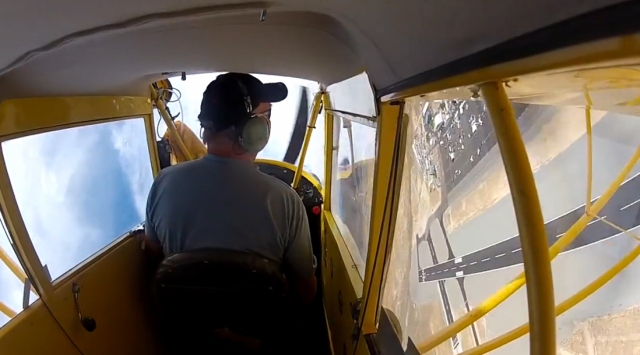 There are hundreds, if not thousands, of internet videos of Kent Pietsch performing his flying routines in the ‘Jelly Belly’ aeroplane. Kent is famous for his ‘dead stick’ and ‘landing on a recreational vehicle’ (RV) displays in his 70+ years old Interstate Cadet. However, this one is a favourite of mine – riding along in the back seat during his ‘comedy’ display. View it full screen and I guarantee you’ll be feeling a little queasy by the end!

There’s everything here, some of it in fast-motion: stall turns, spins, steep turns, low level. It includes Kent throwing things out of the window (which is open for much of the display) including an old tyre. What fascinates me is that the pilot door always looks like it’s going to come open but somehow doesn’t. It’s also worth keeping an eye on the throttle lever (bottom left of the screen) to see when he uses power.

It looks like he isn’t wearing a seat belt the whole time but sharp-eyed viewers will, near the beginning just before a cut, see him reaching down with his right hand  to pick up the lap belt-end; the original Interstate only had lap belts, although many have been later modified to add shoulder straps too.

The aircraft is an almost stock standard S-1A Cadet with a 90 hp engine and no electrics (you can see his hand-held radio attached to the left side windshield strut). I believe the only mod to the aircraft – apart from the jelly bean paint job – is to enable him to jettison an aileron early in the routine, which demonstrates how manoeuvrable the aircraft is, even with half its roll equipment missing!

You can see the routine from outside the aircraft by clicking here.

PS – I know the title of the video should say ‘aerobatic’ pilot, not ‘acrobatic’ pilot but I guess we have to make allowances for our non-aviation friends…

PPS – For more about the Interstate Cadet, you can click here.