Now, I’m usually a very positive person, generally looking for the upside to most problems but occasionally I reach the end of my tether…what follows is not a whinge – just a warning to would-be aircraft shippers.

As regular readers will recall, last year I bought an aircraft from the USA – an Interstate Cadet – and shipped it to Australia. I used a company called International Aircraft Services LLC, based at Hayward Executive Airport in California, to disassemble the aircraft and pack it into a container and arrange shipping to me. They did this well, even helping to fix a problem with one of the seats, which was broken during the ferry flight from Idaho.

But there was one important exception. They didn’t shut the upward opening pilot door properly and during the travel, somewhere between Hayward and Melbourne, the door came open and, aided by its gas strut, the door contacted the side of the container, which damaged the bottom edge. 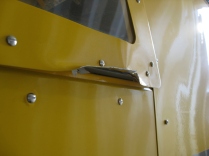 No problem – I thought. I’ll claim on the insurance for the A$1,500 or so it cost to fix – I’d already paid International Aircraft Services for the insurance, which was a specified item on their invoice.

To cut a long long story short, I have been unable to get any insurance money to cover the cost of fixing the door. Not because the insurance company refused the claim but because International Aircraft Services will not tell me who the insurance cover is through and how to make a claim. They do not return my calls and emails (over two dozen documented at the last count) asking for the details of how to make a claim. The person I dealt with is Ed Therrien, who I believe is either the owner or a senior person in the company.

UPDATE – in mid-December 2014, after emailing International Aircraft Services of my intention to post this blog article, they asked me to send them my bank details for a payment – which I did. They said they would make a wire transfer – which after over 7 weeks they still haven’t. Cynical or what?