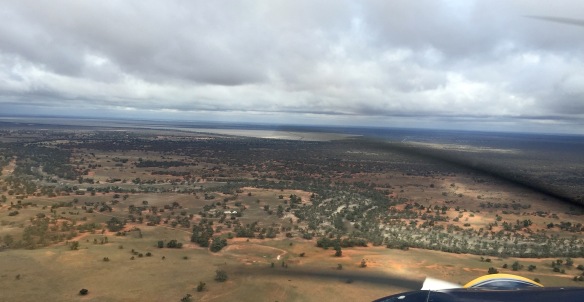 After almost exactly 5 days in Broken Hill, on Thursday morning at last we set out to fly – unfortunately not to the north as we’d originally planned, but south to Mildura on the Victoria-NSW border. The weather was still not anywhere near perfect but at least it was flyable.

There was a stiff southerly wind, which extended the trip time to almost 2 hours – planned time was closer to an hour and a half. But at least Mildura was reasonably clear.

We stayed at the 7th Street Motel and sampled the beer and food at the Mildura Brewery. And planned our next move. One of our group – Norm in the Foxbat – had to return home for a social function on Friday night, so the rest of us decided to head on Friday for Echuca and Yarrawonga, more-or-less following the Murray River. The weather over the ranges on the way home was still a bit marginal but the Saturday forecast was much better, so off to Echuca we started.

While the others decided to fly at 2,000+ feet, I wanted to stay a bit lower and enjoy the sights nearer the ground – birds flying, farmers farming and cows grazing. We stopped at Echuca for lunch – chicken & mushroom soup, courtesy of Ido – and refuelled. Then onward with a short hop to Yarrawonga, where we were welcomed by Peter and Anne McLean of Yarrawonga Flight Training, one of the leading trike (microlight/powered hang glider) schools in the country. Peter and Anne live in an Aladdin’s cave of a hangar with all manner of aviation goodies, from tyres to hi-tech helmets with ANR headsets built in. They are also Australian agents for Air Creation trikes, which are one of the world’s leading brands in this aviation sector.

We stayed overnight – our last of the trip – at the Lakeview Motel, overlooking (as its name suggests) Lake Mulwala, which was temporarily drained to allow the frost (yes, even in Australia!) to kill off the pond-weed. We ate in the newly re-furbished restaurant at the Yarrawonga Hotel Restaurant where I had one of the best steaks I’ve eaten.

Saturday morning dawned clear and very cold – around minus 2 celsius at the airport. Ido took the opportunity to go for a TIF (Trial Instruction Flight) in a Tanarg trike with Peter McLean while the rest of us mopped dew/frost from our windscreens and warmed up our engines.

The first hour of the flight was uneventful, clear skies at 5,000 feet, outside air temperature below minus 5 celsius. Then as we approached the ranges, low cloud could be seen on the south side slopes, drifting in the southerly breeze. By the time we got there, the cloud was starting to break up – as the photo shows – with Mount Dandenong in the distance showing quite clearly. Descending to about 2,000 feet, I made my way directly to Tyabb, while Stephen and Mike in the Bush Hawk went via Moorabbin to pick up fuel, and Jack with Ido did a trial entry into the controlled airspace at Moorabbin – Jack’s looking for an endorsement to add to his new RPL. By about 1500 we were all safely back and tucked up in our hangars.

I’d like to thank Mike, Stephen, Jack, Norm and Ido for a week of constant smiles, even in the trying weather at Broken Hill. We met many friendly people on the way, including motel operators who gave us lifts to and from airfields, as well as all those who came to look at and comment on our motley collection of aircraft. In particular, I’d like to give a very big thanks to Bruce Church and the Aero Club of Broken Hill, who put up with us for 5 days straight, loaned us vehicles, showed us the area, took us for beers and generally made us feel very welcome. Hopefully we can reciprocate their hospitality one day – although not because of bad weather!

Finally, here’s a link to a Flickr album/gallery with a few pictures of the trip.