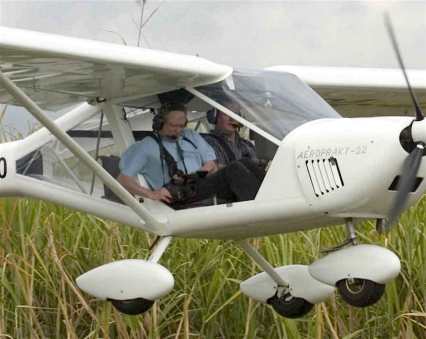 Here’s another question I get a lot: “Is it OK to fly my Foxbat with the doors removed?”.

The answer is yes, it’s OK to fly the aircraft with one or both doors removed. The Vne is reduced to 86 knots while flying with the doors off. The stall speed is not much affected, but try to avoid flying too close to the stall, particularly with only one door removed, as this can lead to out-of-balance flight and a potential wing drop at the stall.

Please note: DO NOT OPEN THE DOORS IN FLIGHT! The curvature of the door acts like an aerofoil and if you unlatch the door in flight, it will likely open very suddenly and strongly, certainly banging hard up against the wing underside. There’s a good chance that the door will come off and may take the tailplane/stabiliser with it – leading to consequences you may not wish to contemplate!

Door removal on the A22LS Foxbat is easy:
– unclip the bottom end of the gas support strut from the ball pin on the door frame; mind you don’t lose the spring clip, which can jump off and disappear!
– unclip the two safety pins which act as door hinges and carefully slide them out, one at a time, supporting the door while you do so.

Replacement is the reverse procedure. The job can be done single-handed but a second person helping to steady the door while you take out the hinge-pins makes sure you don’t drop and damage the door.

At the moment, there is no formal information in the Pilot Operating Handbook (POH) but Aeroprakt will shortly issue information for inclusion in the POH.

1 thought on “Flying your Foxbat with the door(s) off”