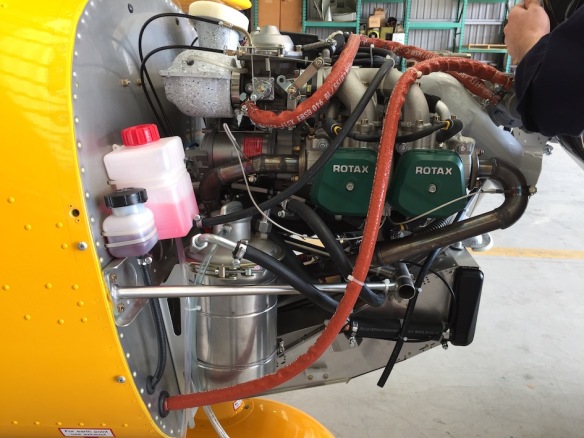 Over two years ago, I wrote a blog post about Rotax engine scheduled – ie regular – maintenance, like oil and filter changes and other time-based servicing.

At that time, I said that the information in the Rotax manuals was ‘about as clear as old engine oil’. After several emails around that time the Rotax-Owner website confirmed by email to me that scheduled maintenance times on 912 series engines should be by reference to flight times – ie ‘wheels off to wheels back on the runway’ – as required by FAA in the United States.

However… it turns out that this may have been wrong. Current Rotax manuals, updated in the last two years, apart from a couple of small anomalies, clearly state that scheduled maintenance must be according to engine start-up and shut down times, as recorded by a reliable engine hours timer. This is further supported by Aeroprakt – manufacturers of the A22LS Foxbat and A32 Vixxen aircraft – who have aligned their airframe maintenance times with those required by the engine manufacturer.

This comes as a blow to many flight schools operating aircraft with Rotax engines, who have serviced their aircraft based on flight times – just like, I may add, the vast majority of the Lycoming and Continental engined GA fleet. At larger airports in particular, start-up/shut-down times can be as much as 25% and more, longer than flight times. When allowing for engine warm-up on cool mornings, the overall % could be even higher – substantially increasing maintenance costs.

Nevertheless, as one of my Aeroprakt colleagues put it: ‘in all aircraft, vibration from engine running is one of the major factors affecting the airframe fatigue life’. This is particularly true of the recreational and light sport category, where airframes have to be constructed to lighter standards and closer tolerances than many GA aircraft. So the aircraft may be less expensive to buy but will require more frequent maintenance. Thankfully, overall running costs in recreational and light sport aircraft are still only a fraction of those in their heavier GA relatives.

So – make no mistake, if you have a 912-series Rotax engined aircraft, scheduled maintenance must be carried out based on engine running hours, NOT flight times!