It’s Monday morning on the first day of December 2014 and I am back in Melbourne after my week at the Mindanao Saga Flying Club, re-assembling a couple of A22LS Foxbats, ready for them to start flying training. I have commented elsewhere on the rest of the week and now here are a few last comments and reflections on my first-time stay in the Philippines.

First off – Mindanao Saga Flying Club (MSFC). This was founded at Mati National Airport by retired Philippine Army Colonel Sam Afdal – SAGA are his initials. There are currently two full time instructors – Rey, a Filipino who is the CFI, who also flies helicopters for the Colonel; and Capt Sam, an Aussie ex-Qantas pilot. There are others also involved with instruction, including Terry, an Englishman, who previously helped set up another flying club near Manila. As seen in a previous blog post, there are four trainee engineers, led by Archie, the senior engineer. They seem to know the Rotax engine (and an HKS for that matter) inside out, and are fully conversant with all the club light sport and ultralight aircraft, including the Foxbat. 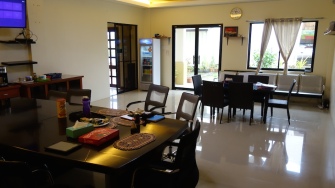 The newly built club house, pilot lounge and accommodation is excellent and all are air-conditioned. The food while I visited was superb and varied – including some European dishes as well as Philippine delicacies. The beer was cold, and the wine red. MSFC hospitality is second to none and without reservation I can recommend a stay there. Aircraft dual and solo hire rates are much less than in Australia and there are some spectacular beaches nearby, which my packed itinerary unfortunately precluded me from visiting! 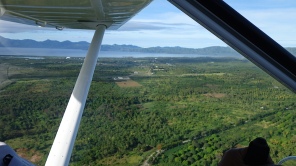 Next – the territory. The scenery is just magnificent! Very lush and green, as you’d expect in a tropical climate. In most places there are wall-to-wall trees, although the beaches offer potential landing places in the event of engine problems. However, all club aircraft are fitted with ballistic rescue systems, which I expect will remain unused, as the quality of maintenance is high. The climate is very warm, even early in the mornings and late in the evenings, so doors-off (in the Foxbat) or open cockpit flying (as in the Quicksilvers) is most enjoyable.

Travel – I flew by Philippine Airways (PAL) from Melbourne direct to Manila and caught a PAL connection to Davao City, Capt Sam was kind enough to meet me there – the place is a huge hustle-bustle of arriving and departing passengers – and drive me down to Mati Airport, where the club is based. PAL is a reasonably priced, middle of the road airline, which I picked because of its convenient flights from Melbourne and big Philippines domestic network. The flights were all more-or-less on time and I didn’t miss any connections. Cabin service was very acceptable.

Finally, there is a selection of pictures on Foxbat Pilot Flickr here which gives some idea of the rich and varied mixture of experiences to be enjoyed.