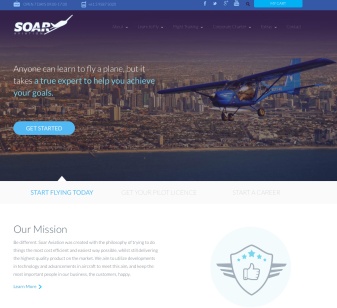 Every now and again I’m aiming to have a look at an Australian based flying school or club, usually but not always, operating Foxbats. The first is Soar Aviation, based at Moorabbin Airport, Melbourne, and also in Sydney, Bendigo and Hong Kong. The idea is to give you a bit more feedback than the stuff available in brochures and on internet sites.

Soar is a young organisation – both in company and employee terms. The company was founded in 2011 and since then has grown rapidly and is now among the most popular flying schools in Australia.

Like many youthful organisations, Soar has targeted its marketing through an attractive, modern & interactive website, Facebook page and Instagram. Through these, they have quickly built a loyal following – their Facebook page alone has well over 4,000 ‘likes’. Not bad for an aviation organisation which is hardly three years old!

Their website, in particular, is the result of a great deal of thought and attention to the needs of the novice pilot and clearly leads the viewer through the various stages, from Trial Introductory Flight (TIF) through to night ratings, a commercial license and beyond. Soar also carries out charter flights,  from the heat of the Red Centre, to the snows of Falls Creek.

Soar has a broad mixture of aircraft, to cater for all flight training needs – two Foxbats, two Jabirus (you can’t win them all!), a Piper Warrior, a Cessna 172 and a Piper Seminole twin. Their first Foxbat – a blue one – was purchased used from an owner in Queensland earlier in 2014. Many people have commented to me about ‘that blue plane’ which always seems to be in the circuit at Moorabbin. Now it has been joined by a second – new – Foxbat, resplendent in bright yellow. Hopefully the two of them will continue to be frequent fliers at Moorabbin.

Recently, Soar acquired a flight training facility at Bendigo, north west of Melbourne. They are also very active in marketing to the growing Chinese market, through their base in Hong Kong. Apart from GA training, one of their key focuses is recreational flying, for which they have an exemption to enable flight training in RA-Aus registered aircraft at Moorabbin.

What immediately strikes you when you visit them at their Moorabbin base is their infectious enthusiasm and the excitement they seem to generate about all things flying.  From my own experience, I think Soar is bringing a fresh new and very customer-focussed approach to flying training.

Too many schools I’ve seen operate tired looking aircraft from tired looking premises, with instructors who seem to have very little enthusiasm for what they are doing. In particular, I recall visiting one recreational flying school during one of my Foxbat sales trips only a couple of years ago, where the school aircraft was low on fuel. So the student spent the first half-hour of their booking going to the local service station for 40 litres of fuel. At their own expense! The instructor thought this was good for the student and made himself a cup of tea, sat back in his armchair and moaned to me about the lack of business and how young people always expect something for nothing…

Soar couldn’t be more of a contrast with this attitude and I wish them every success in their enterprise – and not just because they might buy another Foxbat when demand keeps growing!

PS – Soar is currently looking for a Business Development Manager. If you’re interested – even excited! – by the prospect of joining this young, innovative organisation, SEEK here for more information.