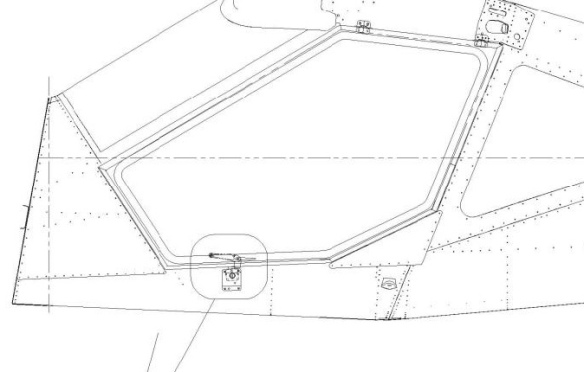 Aeroprakt has issued a safety bulletin covering the door latches on A32 Vixxen aircraft, serial numbers 02-28. Compliance with this bulletin is required before the next flight of the aircraft.

Click here or on the drawing above for a copy of the bulletin: SA-A32-03 Door Latches

Some cracks have recently been found in the Cardan rings on an Australian operated A22LS Foxbat. Although there have been no other reports of similar cracks in the worldwide fleet, because it affects part of the primary flight control system, the factory will be issuing a mandatory inspection requirement and an amendment to the Aircraft Maintenance Manual (AMM). RA-Aus and CASA have been informed.

There are two Cardan rings on the aircraft – these are a type of universal joint – connecting the flaperon control torque tube and the flaperon. They are located just outside the fuselage where the control tube exits the cabin at the rear of the wing – see picture above (click photo for a bigger version).

The cracking is caused by over-tightening the long vertical connecting bolt, possibly made worse by allowing the control surfaces to bang up and down in the wind when the aircraft is parked outside with the controls unrestrained.

Here’s what you need to do BEFORE THE NEXT FLIGHT:

– lower the flaps to their full extent;
– remove the safety pin and loosen and remove the long bolt which runs vertically through the Cardan ring;
– inspect top and bottom lugs of the ring for any cracks;
– if no cracks are found, lubricate and replace the bolt and tighten to 2Nm of torque; don’t forget to replace the safety pin!
– if cracks are found, please contact me at Foxbat Australia on info@foxbat.com.au with clear, in focus pictures of the cracks.

On completion of the inspection, either (a) if no problems are found, record a statement to that effect in the aircraft maintenance log, or (b) if cracks are found, complete an RA-Aus incident report (click this link to get to the form on the RA-Aus website) and send it to the RA-Aus National safety Manager.